Brexit. You can’t escape it. Predict it. Understand it at the best of times. It has split the country down the middle and trampled the status quo of British politics.

It’s becoming less and less relatable by the day as the leading protagonists scramble to deliver the verdict before the Halloween deadline and today, the battle heads into the Supreme Court.

The idea of ‘taking back control’ was a central tenet of the Leave campaign, becoming one of the driving forces of Brexit but what does it actually mean?

The truth is there’s no simple answer. But when it comes to crowdfunding in the aftermath, it’s far more straightforward. It’s given people a powerful voice at a time when confidence in the system is fast diminishing. People are taking control and getting their voices heard.

We’ve seen thousands of people use Crowdfunder to raise more than £3 million for projects spawned by the paralysis at Westminster, Westminster, establishing us as the home of disruptive statements on both sides of the argument. Some are serious. Others less so, responding to the big issues with satire, the most British of reactions.

Either way crowdfunding is propelling more and more people into the heart of political discourse in an increasingly tribal world. All you need to hit the ground running is a good idea and the confidence to share it with the crowd. We’re not here to take sides. We simply give ordinary people a platform to support theirs. That’s what we do best and there have been thousands of projects, but these are the ones that have really caught the imagination.

Hold on to your hats because it’s only just warming up. There’s no proroguing at Crowdfunder. 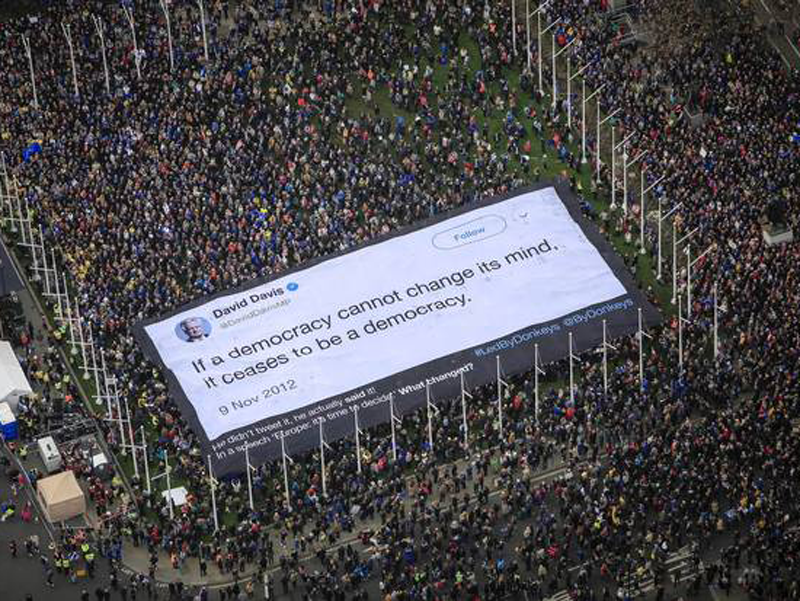 Led By Donkeys are having a great Brexit. Like all great ideas it started out as an idea over a pint and it rapidly became the biggest people funded political movement in UK history. They pasted politician’s spurious Brexit statements on gigantic billboards in all four corners of the country. It took off, reaching millions on the streets of Britain and billions worldwide. At the time of writing more than 20,000 people have pledged almost £650,000 to fund one of the most imaginative and celebrated campaigns of the year.

So far the project has consisted of more than 350 billboards across Europe, three spoof websites and massive projections in Westminster, Brussels, on the white cliffs of Dover, Windsor Castle and Buckingham Palace. There has been a sand sculpture visible from space and the defining image at the People’s March rally in London, attended by a million people. There’s no sign of them letting up, much to the chagrin of the leading Brexiteers. 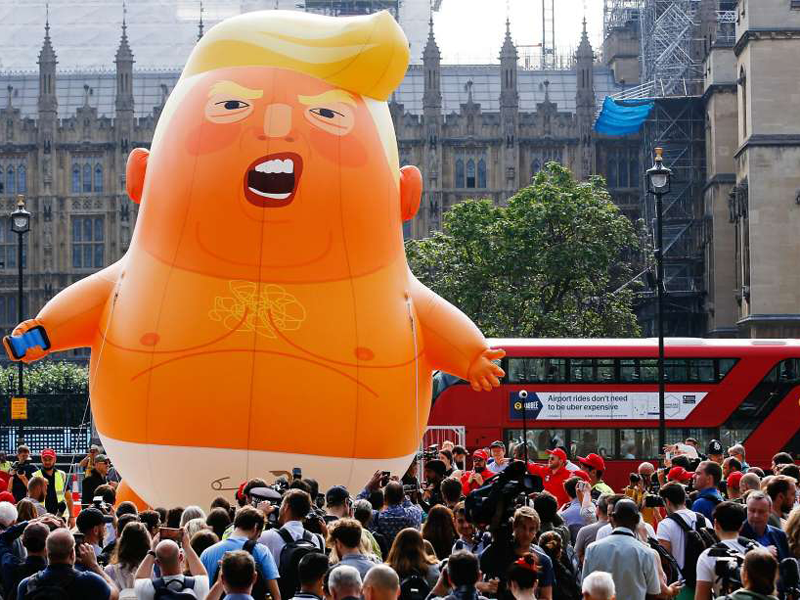 Trump Baby changed the history of protest forever. When it comes to biting political statements it’s hard to look past the hugely controversial blimp ahead of the American President’s divisive visit to the UK last summer. It was something we’d never seen before and it even touched a nerve in the Whitehouse, further proof that when a great idea is backed to the hilt it can go global and reach the smartphones of our world leaders.

It splashed on the front page of every major newspaper across the globe, trended on social media for days and was used by Sky News to brand their coverage of the President’s second visit, enhancing crowdfunding’s growing reputation as a very modern marketing tool. It sparked a copycat project to float a balloon featuring Sadiq Khan, raising twice as much money (well over £60,000) for a counter protest. Both caught the public’s imagination as well as the attention of the Museum of London, who will add the balloons to its permanent collection at The Barbican.

“The blimps symbolise a key moment. If it gets people talking and thinking, then great. Protest is a big part of London’s history and we’re just bringing that story up to date. It’s living history, about expressing how different people feel and bringing that to life. 2018 was the year of the protest balloon. These were the two key blimps that sum up this change in protest and they way it’s then repeated online and across social media. For us, it’s an important moment.”

Trump Baby and Khan Baby raised over £130,000 in total by 7168 supporters through three projects! 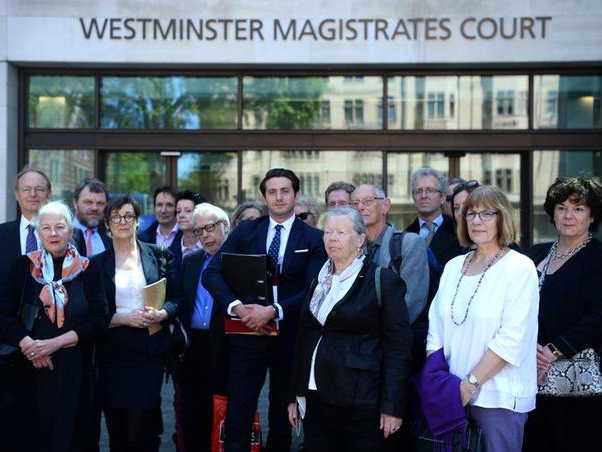 Marcus Ball is taking a different tack. A more traditional appreach from inside the system. The campaigner was backed to the tune of over £400,000 to bring about a private prosecution against Boris Johnson over his EU referendum bus claims. In May the now Prime Minister was summoned to appear at Westminster Magistrates’ Court to answer the allegations of misconduct in public office, leading the news around the world for days, but the decision was later overturned by High Court judges. But the fight goes on. “This isn’t over, we are not giving up,” Marcus said outside the court.

All the money Marcus is raising is being spent on legal fees, communication, research and upkeeping costs and while we see many people turn to the platform to fund legal causes, this is by far one of the biggest and newsworthy in the post-referendum world.

More United have turned to Crowdfunder on no less than five occasions, raising a staggering £684,000 thanks to 18,000 supporters in the past three years. The organisation was founded as the dust settled on the referendum to encourage MPs to work across party lines at Westminster.

They have drastically grown their membership in excess of 150,000 supporters, using their crowdfunding campaigns to spread their message about the things that matter to them including the NHS, disability rights, plastic pollution and immigration. They have used the money to fund 54 candidates across five Parliamentary parties, all of which carry the message of the More United members to secure debates and influence policy change where it counts. That’s real change, from the bottom-up.

The kids are alright: Our Future, Our Choice

Our Future, Our Choice is a group of young people committed to a final say on the Brexit deal. Spearheaded by Femi Oluwole, a British political activist and co-founder of the pro-European Union advocacy group, they’re building a national movement of young activists who overwhelmingly voted to remain part of the EU back in 2016.

They’ve sparked a surge of young voter registrations, mobilising a generation to take action at what they believe will be a devastating divorce from the EU. It’s paid for boots on the ground, visiting schools, colleges and universities across the country to spread their message and protest. They’re also finding more creative ways to mobilise their supporters and it’s crowdfunding that’s driving that momentum. In total they have raised £100,000 in four campaigns by 3,000 supporters, using crowdfunding as a force for good for engaging young people with politics. 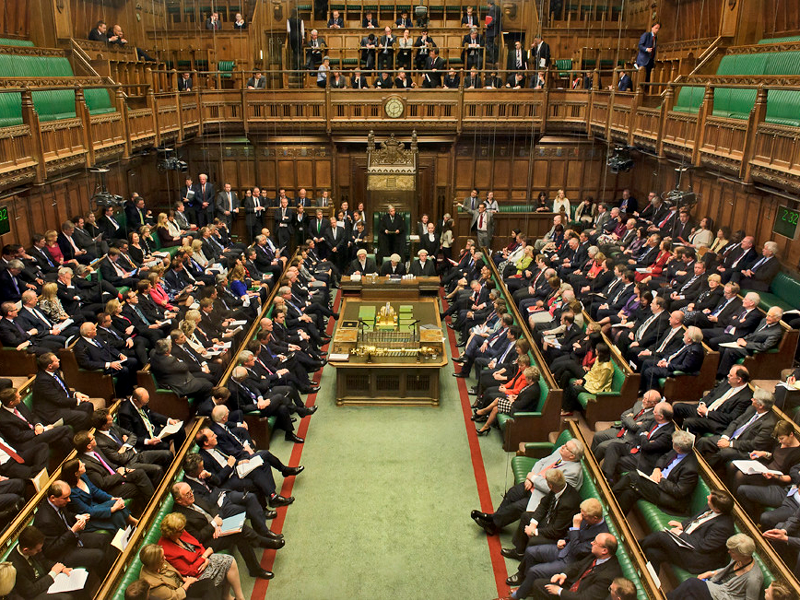 Change it from within. It has been an extraordinary year at Westminster and who knows what will come next. MPs have twice rejected Boris Johnson’s call for an election in recent weeks but that doesn’t mean we won’t have one later on this year.

In the two previous elections we have seen hundreds of Green Party, Scottish National Party and UKIP candidates crowdfund their election deposits, raising well over £1 million for fighting funds. We are already seeing a hatful of prospective contenders fundraising on Crowdfunder as the jostling gets underway this time around. Crowdfunder is the foundation for political change, opening up the process to more and more people to get involved. It’s real democracy in action.

£1.1 million and counting thanks to 700 campaigns

What are you waiting for? Start crowdfunding today and get your voice heard!