If you love something let it go and if it’s meant to be then it will come back to you. This well-known saying came true when, after 18 years apart, fate brought a neglected historic icon back into the lives of those who knew exactly how to restore her.

Built in Kings Lynn using Sandringham Oak, Britannia is the last Gaff Cutter of her kind! After first setting sail in 1915, this 103 year old sailing boat was owned by the Samuels family from 1973 to 1996. They rebuilt her, lived on her, and even sailed her around the Canary Islands and the West Coast of Scotland on traditional sailing holidays. Then, sadly, in 1996 they had to sell her.

Then 18 years later, fate intervened. The family found the boat mooring in Brixham harbour, about to be sold.

The neglected Britannia was in need of some love and Sam and Vicki Samuels couldn’t turn their backs on her. Rallying together with the friends who had sailed with them in the past, they got her back and set up the Britannia Sailing Trust.

Through this, the Britannia – Second Century, Second Chance Crowdfunder was born. Vicki, the chair of the Britannia Sailing Trust, said, “We had been thinking about crowdfunding and had casually been looking at the prospect for a while, but were very nervous about trying it as we felt that none of our team had any experience. We didn’t think that we had the skills!  However, I was made aware of a competition that was being run last year, sponsored by Legal and General, which was targeting projects that related to or were entirely run by people in their fifties or over. I realised that our project, saving Britannia, very much fell into that category with 100% of our Trustees and volunteers being in that age group. Some even being grandparents in their seventies. So I decided to enter the competition and we were delighted to be chosen as one of the winning L&G Community Legend Projects.”

The crowdfunder in action

With an original target of £5,000, the trust aimed to restore and preserve Britannia and, through this, share their shipwriting expertise with the community. Then, once restored, they would be able to offer sail training. Along with this they could use Britannia as a flagship to campaign for cleaner seas, educating communities about ocean pollution. After all, the Samuels had seen first hand the decline of marine wildlife.

On the crowdfunding journey, Vicki said, “As well as raising the all-important funds, one of the advantages of crowdfunding is that you also raise the profile of your project and gain the support of people that you may not have reached in any other circumstances.  People who may want to continue to support us throughout the life of the project.”

After 67 days, they had successfully raised £5,311 from 57 supporters along with two lots of extra funding from our partners. £450 came from Legal & General’s Community Legends fund which helps projects amplifying life for those over 55. Then, Devon County Council provided a further £300 through Crowdfund Devon—an initiative set up to help those in Devon who are making an impact on the community and working towards a better environment.

Vicki continued, “Every penny raised has, and will, be spent on buying materials to restore Britannia, as all our workers give their time voluntarily.  So any extra funding means that we are further down the road of achieving our goal to get Britannia seaworthy again, and to raise awareness about climate change.”

Their campaign even caught the eye of the press. “We were contacted by Claire Woodling, a reporter for BBC Spotlight who came to visit us. We were thrilled to be given a five-minute slot which was shown on Spotlight at the end of August.”

When asked about the impact the project had on the community since closing, Vicki said, “Although unintentional, the whole restoration project and ethos has appealed to older, retired men, who are often neglected by society and feel that they have outlived their usefulness.  Many in this demographic are often skilled men and we are fortunate that they are still fit enough to give us the benefit of their experience and to pass on these skills and life experience to the younger generation. Little did we know what camaraderie and late-life friendships would be formed as a result.” 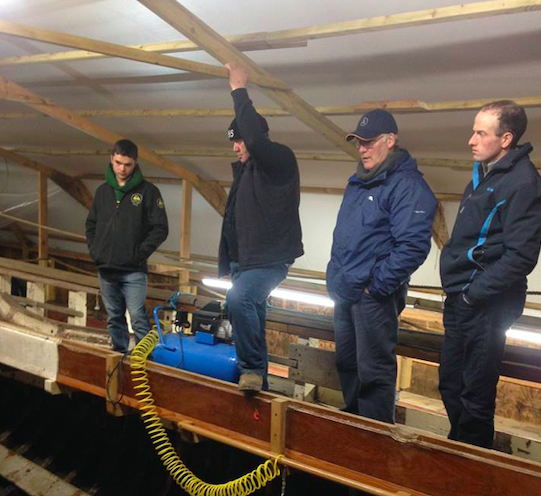 With such a positive and successful first experience of crowdfunding, Vicki left us with her advice for anyone thinking about taking the plunge:

“Don’t be afraid to do it.  Don’t ask for too much, and be prepared to take plenty of advice. It was more fun than I thought it would be!”

Do you have a community based project or great idea? Find out if you could be eligible to unlock our extra funding! What are you waiting for? Start crowdfunding today.