Over the years Crowdfunder has become the home of political fundraising. When it comes to politically themed crowdfunders, over 70,000 supporters have raised over 2 million pounds on our platform.

In fact, with 6 crowdfunding projects to date, the non-partisan organisation More United has raised £709,336 from 18,767 supporters. They work with their members to support any candidate from any political party (as long as they adhere to their values) to create a more united country.

Currently, their sixth crowdfunding campaign is live on our platform. They are aiming to raise £250,000 to enable them to back 200 candidates in the next general election.

They explained to their supporters that, “Years of division and anger have left us all exhausted and our parliament has been paralysed by Brexit. We need a new approach to politics where working together to find common ground is the rule rather than the exception.”

Aiming to give the voiceless a chance to be heard above the political noise, More United launched in 2016. During their soft launch in the Summer of that year, 60,000 people signed up to become members.

This outpouring of support led to the team behind More United launching their first crowdfunding project. They encouraged the public to become part of something big by becoming an original member of their organisation.

What was this ‘something big’? Well, they wanted to change Britain for the better by improving the makeup of Parliament.

There were three steps to completing their mission:

Vote: Choose any candidate from any party that you wanted More United to back.

Act: More United would help these candidates get elected by using the crowdfunded money to help with leaflets and campaign costs.

The team behind More United said, “We are determined to drown out the radical voices in politics and support the values we once took for granted: opportunity, tolerance, democracy, environment and openness.”

During the snap election of 2017, More United turned to the crowd once again with a mission to get more MPs elected who matched their organisation’s values no matter which political party they belonged to.

On their crowdfunding page, they explained, “We are doing something completely new in British politics. Giving thousands of people the power to influence which MPs are elected, and changing our future from one of division to one of unity.”

Once again, their crowdfunding campaign was a roaring success with 3876 people becoming members of More United and pledging their support. These pledges totalled £230,220!

A third Crowdfunder for More United

In December 2017, the team behind More United set up their third crowdfunder, praising their supporters and members by saying, “Thanks to people like you, More United has already begun to make a huge difference in politics.  But it’s time to step up our ambition and impact.”

Their previous crowdfunders had allowed them to help elect 34 MPs from 4 different political parties.

They explained that their next stage was much more ambitious than their previous campaigns.

They had three aims…

They wanted to give those 34 MPs in Parliament the power to have a bigger impact by building a power-base of support and volunteers to help them take on big issues.

They wanted to make the views, ideas, and priorities of the More United members better represented by those in power.

Finally, they wanted to grow their movement, becoming a more powerful organisation, stating, “Together, we’ll be able to take on the extreme forces dominating our politics.”

The next steps: A campaign platform for More United.

The team behind More United explained on their fourth crowdfunding campaign that, “Over the last few months, we’ve begun working with over 80 MPs, successfully campaigning to protect the NHS, restore a fund for Deaf and disabled candidates and change the visa system for doctors and nurses.”

With the noise around politics getting louder, they knew they had to take their organisation to the next level. They wanted to create an online platform where the public could find an issue and campaign alongside MPs they could trust no matter their party, hear what the MPs were doing in Parliament, and stay updated on every new political development. 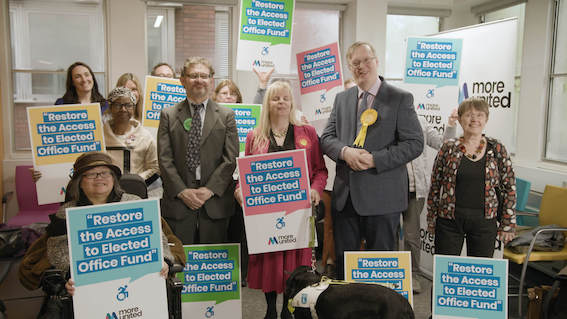 They continued by saying, “If we care about an issue, we should be able to find MPs who agree with us and who are willing to work with thousands of people like us to change the direction of our country. This website will help make that possible.”

1476 people banded together to raise £40,905, enabling them to create MoreUnited.org.uk.

Since 2016, More United had grown immensely and, with more supporters, came bigger ambitions.

Through smarter advertising and sustainable fundraising, they wanted to reach more people and tackle even bigger issues such as poverty, climate change, and mental health.

Crowdfunder is the foundation for political change, opening up the process to more and more people to get involved. It’s real democracy in action. Check out Political Fundraising on Crowdfunder!