But it’s not just entertainment. Sport contributes £39 billion to the economy each year and employs 400,000 people. Livelihoods are on the line and the role that our institutions have in inspiring our young people is under real threat.

As is so often the case, football continues to receive an inordinate amount of attention.

It’s a unique business and the emergency has exposed what many of us knew already. That the majority of our football clubs are not strong businesses and the lion’s share of the game’s capital is locked at the top.

Earlier this month Matt Hancock came under fire for his comments about Premier League players but they soon stepped up, as clubs already had, to take an early role in the response to support the communities they serve.

It’s a challenging time. Maintaining a level of engagement with supporters is a struggle when there’s nothing to report. No matches or player movements. There’s been ghost matches, eSports, a rush to remember the good times and a focus on the lockdown video diaries of the management and players. The ‘then and now’ can deliver a moment of escapism from the crisis and it’s as important now than ever.

In a lot of cases, the marketing plan has gone out the window. Forward thinking has been put on hold. But we believe there’s an opportunity now to be creative and produce campaigns that can bring together communities, easing the impact on cashflow in the process.

We call it Pay It Forward.

The idea was our immediate response to the overnight collapse of the hospitality trade because of lockdown. It enabled cafes, bars and restaurants to quickly diversify their business and adapt to the developing situation. It was quickly adopted by a variety of industries and as a result, we found ourselves listed as part of the Government’s relief effort on the Cabinet Office website.

We are now working alongside the Mayor of London to support businesses in the Greater London region, with £1 million of matchfunding available to tackle the economic emergency.

We’ve just launched Pay It Forward London, a new website with @CrowdfunderUK that allows small businesses to generate cash flow in these difficult times. Get started today, it only takes a few minutes.

Deputy Mayor for Business @RajeshAgrawal has the details:

We already had a strong tradition of supporting clubs but Pay It Forward is something of the moment. More and more clubs are looking into it right now.

Dozens have gone live and they are on course to raise £600,000 between them to mitigate their concern around cashflow and support their suppliers. Every single penny that’s raised goes directly into the campaign. We’ve waived our platform and transaction fees to support clubs during the crisis.

It’s more than just giving. What it isn’t is the online equivalent of rattling a bucket. It’s about pulling together a neat campaign, generating advanced sales and driving meaningful engagement.

Clubs are paying it forward. 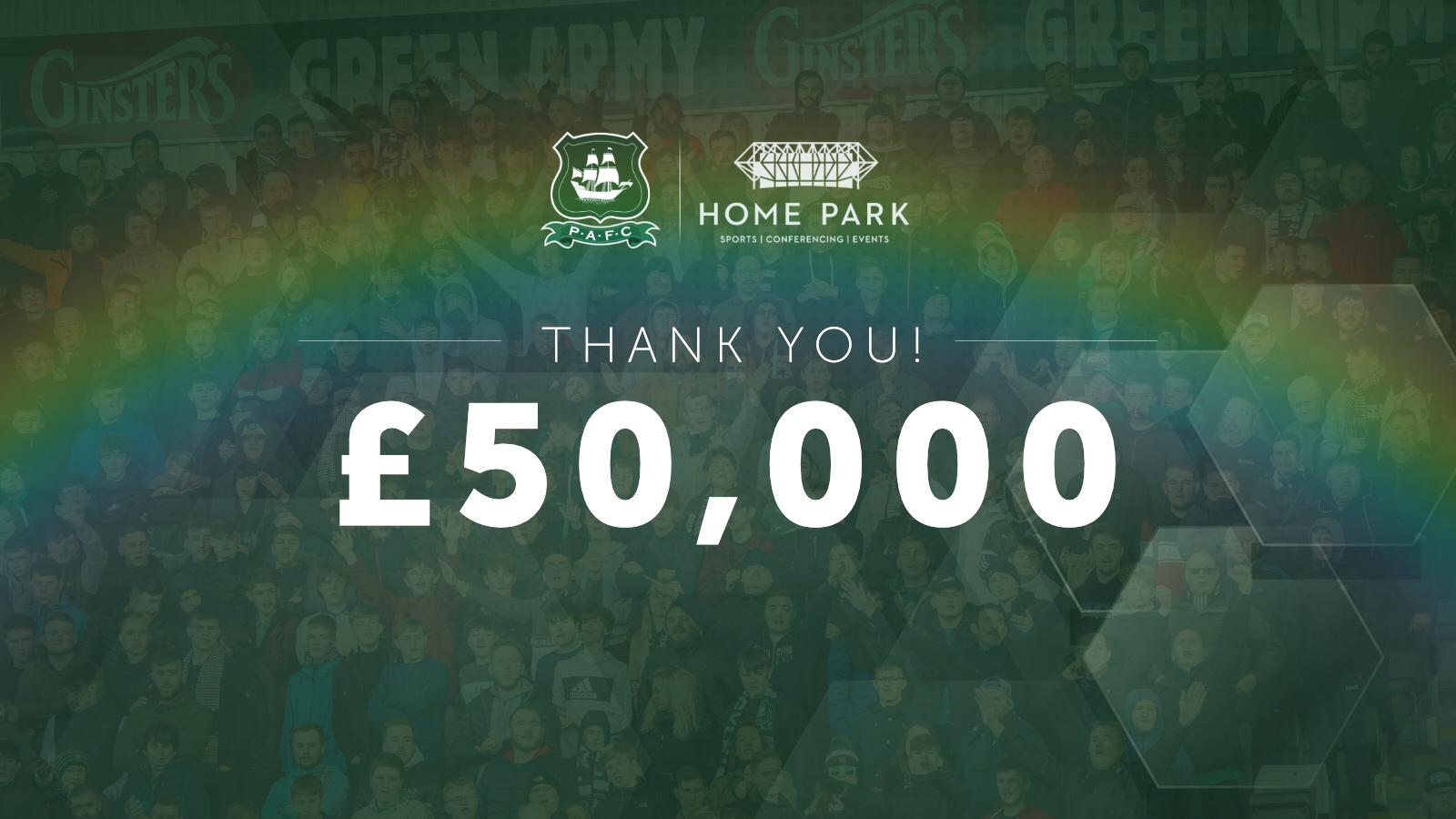 Morecambe and Leyton Orient are the latest EFL clubs to turn to Crowdfunder, joining League Two promotion contenders Plymouth Argyle. The Shrimps are pre-selling their forthcoming centenary strip together with a number of exclusive packages to bring supporters closer to the players. Meanwhile Orient are doing something similar after raising over £65,000 for charities through their recent ‘Ultimate Quaranteam’ eSports tournament.

Plymouth’s Green Army were quickest off the mark to develop an innovative offering and tipped £50,000 when it closed. Their commitment to their suppliers was honoured through a range of rewards from their ticketing and commercial teams, while for every £100 they raised they donated a match ticket to a local NHS worker. There will be 500 heroes in attendance at Home Park when the action gets back underway.

Chief executive Andrew Parkinson told Plymouth Live: “I think it has been amazing. As soon as we launched it we were blown away by the response.

“It came about from fans themselves actually. It’s their club and they wanted to be involved in any way that they could.

“Obviously, this is largely about bringing things forward from next season – it’s forward financing as it were.

“It has been really helpful in supporting the suppliers, local businesses, and that’s what we want to do.”

Cheltenham Town are a fourth League Two club to turn to crowdfunding. Their players though have used the platform in a different way, this time challenging each other to shave their heads in return for donations to the county’s NHS charity.

They’ve raised almost £10,000 with gift aid, catching the eye of the national press and entertaining their supporters at a time when stories are at a premium. It’s the latest in a string of projects championed by the supporters of the Gloucestershire side, generating £100,000 for various projects and causes down the years. That includes their scoreboard initiative, hailed the ‘best marketing campaign in the club’s history’ by former chairman Paul Baker. 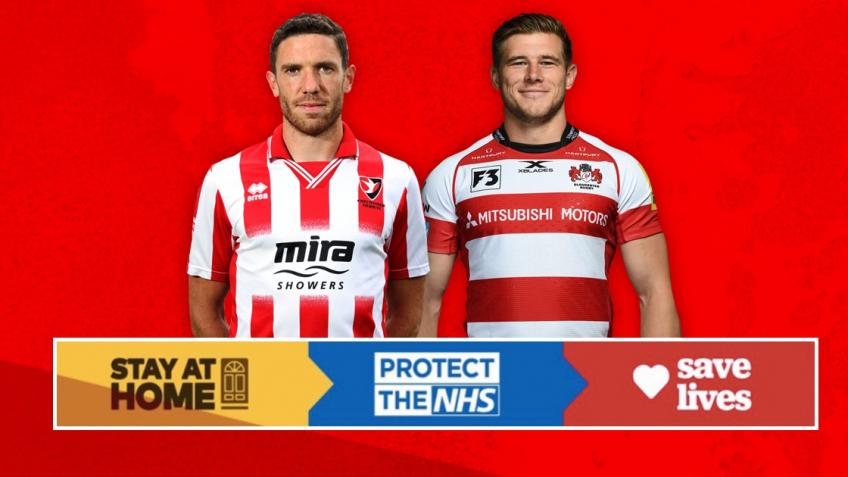 From the National League we have seen Notts County surpass their £25,000-target, energising the locals behind the Neal Ardley’s side. The club offered up advance sales of tickets, money-can’t-buy experiences and a range of commercial products while showing their support for Age UK. They will donate 10% of the proceeds directly to the charity.

Jason Turner, the club’s chief executive told club’s website: “I’d like to say a huge thank you to Crowdfunder, who are waiving their fees for all sports clubs during the coronavirus pandemic. We really appreciate this gesture and look forward to welcoming their representatives to one of our matches.”

Thank you so much! That money will make a difference to the lives of local older people. https://t.co/CMpiMbyYUQ

Last season Notts County lost their claim to the Football League’s oldest club when they were relegated alongside Yeovil Town, and only three points separated the former EFL clubs in the promotion places when football was put on hold. The Somerset club has reached out to communities in Somerset with a Crowdfunder campaign of their own, bulging with fan and commercial rewards.

The division’s other Magpies, Chorley, have seen a decade of steady progress off the pitch but the crisis has temporarily curtailed their momentum. They have turned to their community for help and the response has been brilliant. In the North, Guiseley and Curzon Ashton are well on the way to their targets while in the South, Gosport Borough has raised well over £3,000 to supply food to vulnerable people as part of their community relief effort.

There is also a string of inspiring stories from the Ishmian Leagues. London’s oldest football club Cray Wanderers are underway, as are Tooting and Micham and Sittingbourne. The Southern South’s Frome Town produced a compelling campaign to surpass a target of £20,000 to save their ‘#BA11 Community’ including the chance to name the stadium at Badgers Hill. Not bad for a club who lost three invaluable home derbies through the cessation of the season, leaving them with an average gate of 300 this term. You can listen to campaign manager Scott Fitzgibbon speaking to BBC Somerset about its success below.

Lastly Worthing FC have launched a campaign to raise £43,000 to develop the facilities at their Woodside Road ground, while strengthening ties with the local community with a number of fan engagement rewards.

FC United of Manchester of the Northern Premier has a widely envied model of fan ownership and have returned to Crowdfunder to make good use the downtime, completing essential #NoDrainNoGame maintenance work on the playing surface at Broadhurst Park – in part crowdfunded by the fanbase in recent years. Gainsborough Trinity ply their trade in the same league and have followed suit. Stocksbridge Park Steels and Lincoln United have also launched campaigns. North of the border, Alloa Athletic of the Scottish Championship are up and running.

The Crowdfunding site is now open!

Don’t delay as many of the superb rewards are limited to a small number.

We simply can’t afford to lose any of our clubs.

The picture is perhaps bleaker in the women’s game. Earlier this week AFC Fylde became the first team to disband, folding as a result of the ongoing uncertainty. There are fears that that the game will badly suffer. Fifpro, the global players’ union, warned of an “existential threat” because of a potential withdrawal of funding.

Sadly sustainability feels a very long way off at the moment.

Last week Welsh club Rhyl became the first casualty in the men’s game, liquidated after 141 years, but their supporters are already looking into the feasibility of a phoenix club. We believe that bringing together communities around their clubs is the answer, now more than ever.

There are some fantastic examples of ‘community clubs’ across the UK but for others it’s a convenient soundbite. A hollow marketing line. It’s time to quickly re-imagine that relationship. Redistribution and reform hold the key in the long-term but for now the opportunity is there to reconnect our clubs to the people and businesses in the local area.

Crowdfunding is a great way to build an identity and help establish a set of values for a club, aspiring to be at the heart of its community. And tell that story well.

Time and again its proven to be the most natural of social networks. Supporters are invested both financially and emotionally in your success. Easing immediate financial issues just happens to be a (most) welcome by-product.