Bimini Love—a member of the Crowdfunder family—just received a Points of Light award from the Prime Minister, Theresa May, for her crowdfunded work on Street Cramps!

Who is Bimini Love?

Bimini Love is a 17 year old girl from Cornwall who, for the last two years, has been taking a stand against period poverty. Two years ago, she noticed an increasing number of homeless women in Cornwall. Realising they wouldn’t have easy access to supplies for their basic sanitary needs, she knew she had to do something about it.

In the end, her project raised over £7,000 on Crowdfunder, providing products, clean underwear, and even heat pads for homeless women. Better yet, she raised enough to supply the whole of Cornwall…for a whole year!

She even featured on BBC Three’s Amazing Humans series and had her very own Tedx Talk.

Earlier this year there were even plans to build a 60ft tampon which was to be floated down the Thames in London, sending a message to the MP’s at Westminster about period poverty that they couldn’t ignore.

Two days after this campaign was launched, the government announced funding to end period poverty in English schools.

Street Cramps: Cornwall and beyond.

After working with charities across cornwall, Bimini set up a permanent initiative called Street Cramps so those in need could have access to welfare boxes containing supplies for their most basic sanitary needs. 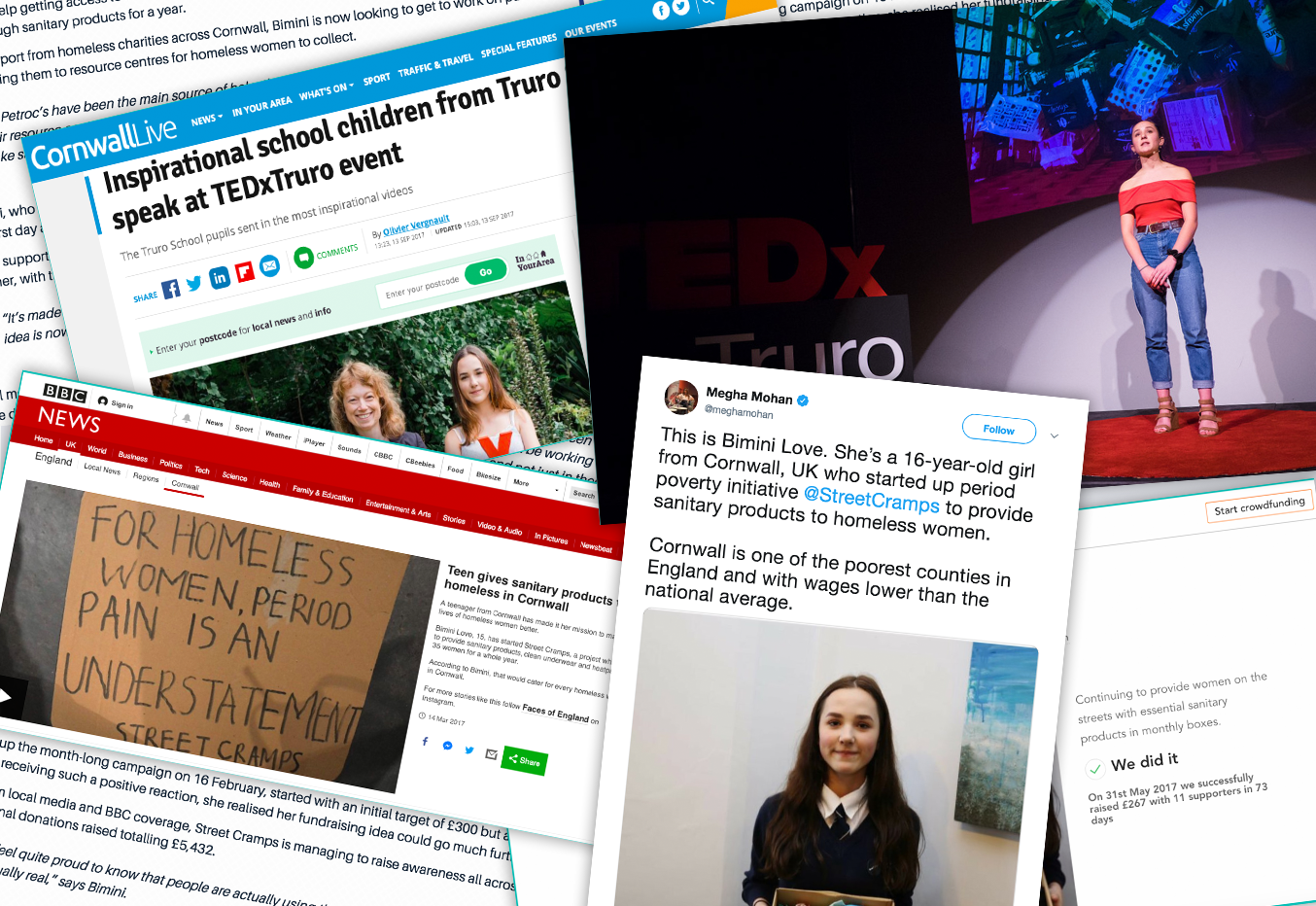 Though, of course, period poverty extends so much further than just Cornwall. In fact, Street Cramps is needed all over the world. To help others like Bimini take a stand against period poverty, Crowdfunder set up a page dedicated to Street Cramps, helping others tackle the problem in their own communities.

You can even see all the amazing Street Cramps projects which have been popping up on Crowdfunder ever since.

What is the Points of Light award?

The Prime Minister’s Points of Light award is given out daily to ‘outstanding individual volunteers’. It gives recognition to the amazing people who are making a real change in their communities!

Set up in partnership with the US Points of Light Foundation, the UK’s award has been running since April 2014.

Today, on the 7th June 2019, Bimini Love was named the 1196th Point of Light for her work on Street Cramps and we, at Crowdfunder, are overjoyed with admiration for this inspiring story!

If you’ve been in inspired by Bimini you can start crowdfunding for your own Street Cramps project.