The story of Iseabal Hendry, a designer in the Scottish Highlands who took the leap to start her business.

“My Dad used to work in the leather industry and I grew up with a real appreciation for it. In 2013, during my second year of university at the Glasgow School of Art, I started to work with leather too. I joined a small sustainability project with Scotland’s Bridge of Weir Leather Company to make use of their excess scraps. While everyone else was reaching for the larger pieces of leather, I picked up the smaller ones and began weaving them together”.

This work formed the basis of what was to become, in September 2020, the first Iseabal Hendry ‘Capsule Collection’. A range of four different bags, launched through a rewards based crowdfunding campaign on Crowdfunder, enabling Iseabal to both pre-sell her items and secure in advance the funds needed to get them manufactured.

Iseabal works on the premise that time invested in the making of fewer products of greater quality is time well spent. The detail and craftsmanship in every item, ensures its longevity and the proper management of the resources available. Inspired by the ethos of the highly praised Hiut Denim Company, a business based in the small town of Cardigan in Wales, Iseabal focused on the motto, to do ‘one thing well’. Their history of jean making was rekindled from the embers of an industry shut in 2002, which had previously employed 10% of the town’s population. They have since re-harnessed this long legacy of knowhow and skill, bringing jobs back to Cardigan to make ‘the best jeans, not the most jeans we can’.

Iseabal’s speciality lies in the weaving of leather, she explains, “where often makers are forced to expand their offering, there is something to be said in sticking to one thing”. To complement this focus, she decided to find a bag maker in the UK to partner with. At long last, after much searching she found one. This new Capsule Collection showcases ‘hand craft and traditional craftsmanship with a new, modern aesthetic’, with each item taking around 15 hours to make. 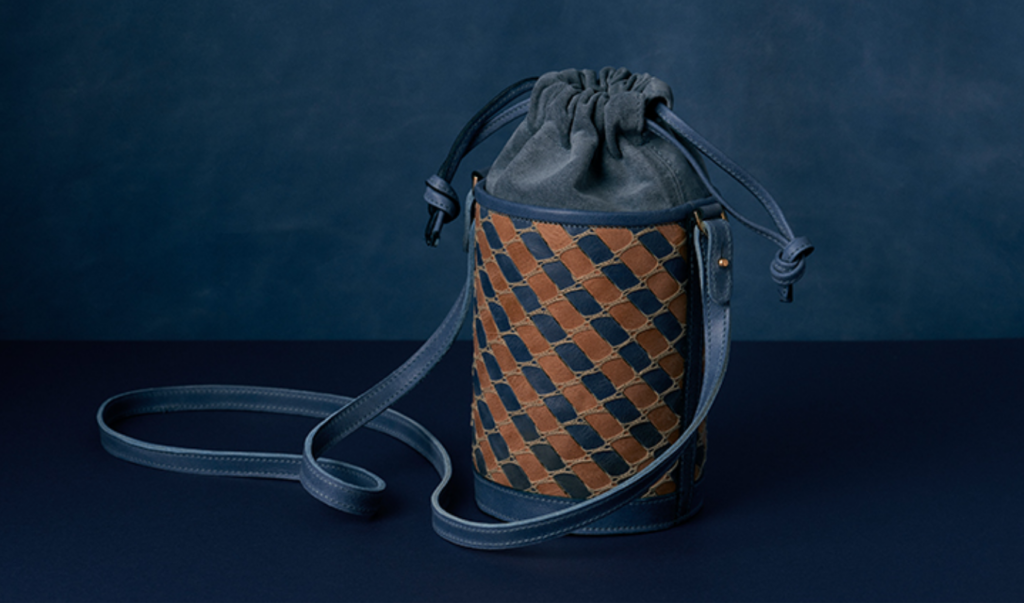 Why did you decide to crowdfund?

At the start of 2020, Iseabal was working two jobs and the loss of one due to coronavirus and the leaving of another, left her in an awkward gap with no government support. Iseabal had signed up to a number of crafts related newsletters. As fortune would have it, an email came through from Creative Scotland with an opportunity for arts related businesses, to win match funding through a partnership with Crowdfunder UK. Her application was acknowledged with success and she was soon contacted, “telling me I’d been accepted into the Creative Scotland crowdfunding competition and would be starting in four weeks time”.

This was the push she needed, “I’d never sold the bags before, I had prototypes and it was this campaign which gave me the opportunity to start”. The timeline was tight but Iseabal stuck to best practice advice that a campaign should take 4 weeks to plan and 4 weeks to run. On 14 September 2020, Iseabal succeeded in raising £18,095 from what was originally only a £5,000 target. “I really didn’t think that I would make that, I was quite nervous about the process, mortified about the idea of asking even my friends for a fiver. From the crowdfunding experience I’ve discovered how important it is not just to wait until every single thing is perfect, it’s about putting yourself out there and getting started”.

What advice would you give to the next person crowdfunding?

Iseabal believed that 80% of the support she received came from those she knew either first or second hand, with the remaining 20% coming from outside of her own network. “I wrote to a lot of publications, the majority of which I didn’t hear anything back from. The local press however, went above and beyond to help me, The Highland Times in particular were extremely helpful and proactive in my promotion. My advice would be to stay true to your roots, explain that you’re from the area and why you think their readers might be interested. It always helps having something ready for them to print”. Since the campaign has ended, there have been many more features, one of which can be read here in True to Size an online platform championing the stories of makers in fashion who are doing things differently.

149 people supported her campaign with 88 of the pledges coming in as donations and 61 as rewards. “If I’d launched this campaign on my own website there wouldn’t have been a donation button and in crowdfunding, even if it’s not
quite someone’s thing, they can still choose to support you”.

Iseabal has a strong connection with the highland countryside that she grew up in. Much of her inspiration for the design of her work has come from the rocks, rivers and skies that surround her. To do the brand’s story justice, she felt it important to get a film made for the crowdfunding campaign. A film that would colour-in what couldn’t be expressed in her pictures and words, something that would still have a lasting value outside of the campaign itself.

Where is your company now?

Now that her orders through the crowdfunding campaign have been fulfilled, this January Iseabal will be investigating new colours to work with and the possibility of a small batch production on certain items.

If you have an idea to start or grow a creative business, check out Crowdfunding Creativity a resource hub on Crowdfunder UK to help turn your idea into a reality through crowdfunding.